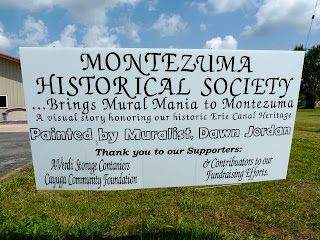 The Town of Montezuma will soon receive the gift of a historic mural that will highlight the Town’s historic canal heritage. The Montezuma Historical Society has initiated the project on behalf of the Town for a new mural, and is being helped with a donation from A-Verdi Storage Containers and a grant from the Cayuga Community Foundation. A-Verdi is an owned & operated business in Montezuma for over 30 years and is the premier provider of Storage & office solutions throughout New York State. The Cayuga Community Foundation is a component fund of the Central New York Community Foundation that assists non-profit organizations with vital programs in education, health, social services, the arts, civic,  environmental concerns, and the preservation of historic resources in Cayuga County.

Mark DeCracker of Lyons, and creator of Mural Mania encouraged Montezuma to join with other communities along the Erie Canal to share the visual story of New York State Erie Canal history.  Today it is hard to visualize what Montezuma looked like during the early Erie Canal era.  MHS is providing the town with the mural to reconnect with its sense of heritage and place, and to share its important story with others. The original Erie Canal that joined with the Cayuga/Seneca Canal in 1828, and flowed through Montezuma have long been filled in. Gone are many the businesses that lined the canal streets. Since almost all of the original buildings with businesses that served the canal and community no longer exist, there wasn’t even a place to paint the mural. When Joe Verdi, owner of A-Verdi Containers learned of the dilemma, he generously donated a 8’ x 20 ‘ container to paint the mural on.

Dawn Jordan, muralist, is painting the mural in A-Verdi’s parking lot on Route 31. Dawn, a talented artist has painted several local Erie Canal murals including Port Byron, Weedsport, Jordan and Lyons depicting Erie Canal history.  To help fund the project, the historical society has held several fundraisers.  The mural is based on a historic photo of the Erie Canal, the Cayuga/Seneca Canal, the crossover bridge, and the Exchange Hotel that burned in 1918. Comfort Tyler, early settler and visionary, who built of one of the first boats on the Erie Canal named for its namesake, “The Montezuma,” will be painted into the picture.  The mural’s permanent location will be at the site where the Exchange was built in the 1830's located at the trailhead entrance of the Montezuma Heritage Park on High Street.  Future plans include the mural becoming part of a replica boat façade of “The Montezuma.”
Posted by cml115 at 12:49 PM


Enter the main trailhead on the path of the old Erie Canal towpath in the Town of Montezuma, off of State Route 90 onto Erie Street, north of the Firehouse on High Street. The trail leads to straight to the Richmond Aqueduct on the Seneca River, about .08 of a mile.

Learn more about our special connection to the canal and then explore the entire Erie Canalway National Heritage Corridor. You’ll find exceptional scenery, history, and adventure along more than 500 miles of waterways and trails.